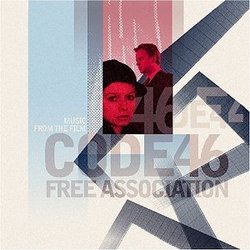 There are precious moments at the beginning of movies that paint a picture of what kind of story you are about to see. However, these images do not guarantee that the film will be any good. I knew with in the first images of Michael Winterbottom's new film, Code 46, that I was in good hands. I had that welcome feeling of connecting to the film. In this case, the connection came less through the director's choice of opening images and more through the choice of music over the images. It was a feeling one gets when they know they connect to something. It's hard to explain, but in this case, it wasn't necessarily the images that I connected to, but the director's choice in the music used over the images.

The opening title track "Shanghai" paints an atmosphere of loneliness, wonder, and uncertainty in this futuristic society, yet it is uplifting. There are no drum machines here, just mood without being abrasive. It sets you in the right frame of mind to go into this love story and allow you to be caught up with its... beautiful melancholy.

Free Association is comprised of ex-DJ-turned-film-composer David Holmes (Out of Sight, Ocean's Eleven) and Steve Hilton. (Also be sure to check out their score to Stander. "Stander.") Together the two have fused an exotic ambient score that may be unconstrained and undirected, but captures a surreal atmosphere that connects one to the story and by the same grace, lets the score stand on its own.

The tracks that stand out – "More Than a Kiss," "Birthday Party," and "Mother"—for their keeping on with the somber, yet hopeful mood. But also "Inside/Outside" and the closer "Code 46" for its arrangement of shuffling drum beat blended with guitar and synths.

My only complaint is its length - a mere 32 minutes. However, I think it can be the right amount of time to get one in the mood to think, to write, to engage. I don't recommend the score to everyone; you have to take it for what it is: a mood piece, but a damn good one.