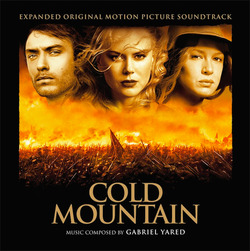 Nominated for seven Academy Awards (including Best Original Score and Best Supporting Actress), this wartime romantic drama is based on Charles Frazier's novel. At the dawn of the Civil War, the men of Cold Mountain, North Carolina, rush to join the Confederate Army. Ada Monroe (Kidman) has vowed to wait for William Inman (Law), but as the war drags on and letters go unanswered, she must find the will to survive, and Inman the courage to endure the savage odyssey of a war-torn way back home to Ada's arms.

After the epic, lush romanticism of his Oscar winning score to The English Patient, Gabriel Yared's Oscar-nominated Cold Mountain took a more introspective and melancholy approach for its characters' emotional and physical journeys. While his haunting orchestral emotion remains, the memorable themes of Cold Mountain would center on piano and strings, conveying an unbreakable longing between two lovers who only shared a kiss before parting, but now are bound to be together. From the suspenseful build to a catastrophic explosion to the poignant melody of a last embrace, Yared's score is a towering, poignant achievement in the composer's work with Anthony Minghella that remains movie score romantic favorite.

Supervised by Gabriel Yared, the program has been assembled and remastered from the recording session elements. Disc 1 ("The Film Score') presents the film version of the cues in chronological order. Disc 2 (''The 2003 Promotional Album & Bonus Tracks'') presents the original Academy Awards promo album that features numerous variations, also including unused tracks and alternate material. The CD comes with a 16-page booklet with liner notes by Daniel Schweiger, discussing the film and the score including new comments by Gabriel Yared and film editor Walter Murch on their collaboration with Anthony Minghella. The release is limited to 1000 units.