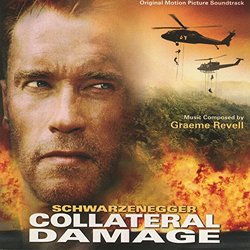 Arnold Schwarzenegger is in serious trouble.  His past few films have yielded a lackluster box office response at best, and with a slew of sequels on the horizon (Terminator 3, King Conan, True Lies 2), he needs a fresh, inventive film to help rejuvenate his floundering status as a box-office titan.  It seemed like a good idea at the time: Schwarzenegger plays a Los Angeles Fireman whose wife and child are killed in a terrorist attack.  Since the government moves too slowly, Arnie goes into the jungles of Columbia to exact his own revenge.  Toss in director Andrew Davis (The Fugitive), and you'd think you'd start to get something cool, right?  Well... unfortunately, it just didn't work.  The acting was flat; Schwarzenegger seemed to old and slow; there were no classic punch lines, the action was mild at best, the storyline was hammy at times, the ending was anti-climactic, and the score by Graeme Revell felt phoned in.

I have enjoyed much of Revell's repertoire.  He uses percussion incredibly well, and has been able to pull of a suspenseful, tense action score with little difficulty.  Unfortunately, that skill didn't really do too much for this film.  An opening track that sounds a little like something Ed Shearmur did in K-Pax, "Century City Bombing" uses strings and percussion to add a sense of foreboding drama, but doesn't do anything for me.  After a short melancholy "emotional" cue in "Remembering", the album goes into autopilot.  "The CIA" has a lot of the same percussion and strings, with ominous brass, that will be heard through much of the album. "Journey To Columbia" is interesting only because Revell gets a chance to use his ethnic sensibilities, with the percussion and pipes.

"The Roadblock" is replete with dissonant percussive action, "The Journey Up-River" starts out creepy and ambient, but slowly takes on an exciting rhythm (the hand claps work well), but just ends with more low ambience.  Speaking of ambience, "The Lone Wolf" is full of it, but at least we get some emotional backing with "Selena's Story".

The action starts to really kick in with "Village Massacre".  Hard electric guitars, pounding percussion and a low brooding brass line - this is finally something worth hearing.  "On the Trail" combines emotional strings with tense percussion underneath, and the cue ends up being pretty enjoyable to boot.  More tense action kicks in with "Going Down", but it really heats up with the "Subterranean Chase".  This 1:20 long cue brings it all together, and is (ironically) one of the more thematic cues on the album.  It was unfortunately just way too short.  After some more action in "End Game", followed by the "emotional" resolution in "It's Over", the album comes to a close.

I can't really recommend this one, even though there are a few cues that held my interest.  It only runs 35-minutes, and it felt a lot longer - usually that's not a good sign.  With the lack of any real strong thematic material (oh, it's there - it's just not strong), and the knowledge that Revell has done better in the past, I would have to suggest you look at the back of the album, grimace at how old Arnie looks, and then move on down the rack.