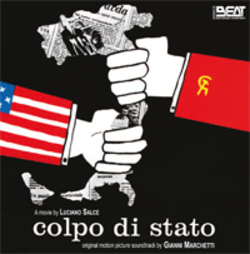 Beat Records continues to explore the career of Gianni Marchetti by issuing his complete soundtrack from the film Colpo di stato, a satirical, political comedy directed in 1969 by Luciano Salce. In addition to the original 33 rpm album material in stereo (29:02), another 25 minutes of mono bonus tracks were discovered and added for a total time of 54:20. Maestro Marchetti proves once again his enormous talent by writing a memorable score with classic flavor and lounge music sounds.

Now available in our BCM series with a 12-page booklet designed by Alessio Innuzzi using original key art, with liner notes (in Italian and English) by Fabio Babini and mastering by Claudio Fuiano.