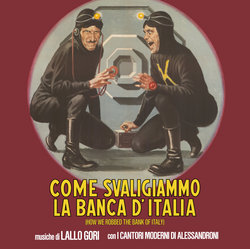 The scat-jazz beat masterpiece of one of the most brilliant but overlooked soundtrack masters of popular Italian cinema, Coriolano Gori, composed for a wild spy-movie parody directed by the legendary Lucio Fulci. An outstanding soundtrack, never before released on any format, recovered and remastered from the original master tapes, boasting the invaluable contribution by I Cantori Moderni di Alessandroni: their vocal presence contribute massively towards making the whole magnificent soundtrack a delicious and flawless exemplary of Italian cinematic sound of the mid-60s. A Swingin' Rome style, featuring Gino Marinacci on flute.