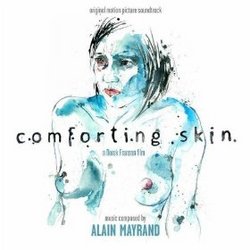 Following the film's world premiere at the Vancouver Film Festival, Screamworks Records presents the original score from Derek Franson's surreal drama about a young woman's relationship with a shifting and whispering tattoo she has willed to life on her skin.

The highly original music for Comforting Skin, written for a chamber ensemble consisting of strings, woodwinds and piano, is by Canadian composer Alain Mayrand, whose highly entertaining and playful large orchestral score for The Legend of Silkboy was released by MovieScore Media last year. The fascinating score for Comforting Skin reflects states of desolation, despair and dementia, effectively making use of stark contrasts between poignant melodies and atonal colors evoked by a wide variety of extended techniques.

This is Screamworks Records first digital only release.