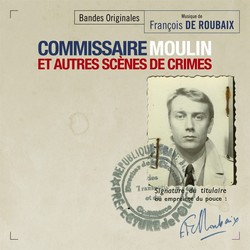 Commissaire Moulin is the 1976 French television series created by Paul Andréota and Claude Boissol and starring Yves Rénier as the titular character, Police Commissioner Jean-Paul Moulin. Before going to the Canary Isles, François de Roubaix composed an upbeat theme on his eight-track recorder and dropped off at the home of Claude Boissol the musical soundtrack for the series, which included two versions of the main theme as well as two interludes of around twenty seconds. A few days later, François de Roubaix died in a diving accident on November 21, 1975.

This compilation came from the idea of Fred Mergam, the WéMč Records label owner and Benjamin de Roubaix, the composer's son. Between electronic tricks and acoustic works, this compact disc brings the themes of this television series together with other music composed for never released or still unknown projects. If the majority of the music on this disc does not originate from police stories, it nevertheless fits in with suspenseful atmospheres and other crime scenes.

Transferred from the original master tapes, this expanded edition of the LP record produced by WéMč includes six unreleased tracks, carefully selected by Music Box Records, in an effort to extend the mystery of this imaginary soundtrack. This new real gem dedicated to François de Roubaix once more demonstrates that his unique talent for melodies never failed.