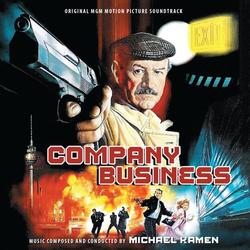 Intrada revisits one of its earlier albums with the release of Michael Kamen's action and suspense-filled score for the 1991 MGM film Company Business. In many respects, the style of scoring is reminiscent of his score for Die Hard, three years earlier. Opening with a rhythmic figure for brass and strings, it's immediately apparent that for this buddy-spy film with its tongue in its cheek, Kamen took a serious, hard-edged approach. As with Die Hard, the score does not overflow with melody, but one does emerge later in the film, starting as source music but later appearing as a smoky theme, with tenor saxophone spotlighted. As John Takis summarizes in his liner notes, "What ultimately makes Company Business worth celebrating is not merely the balletic proficiency with which Kamen hits each beat of the action. Nor is it the brilliant orchestrations that fold in just enough distinctive elements—balalaika, piano, a touch of synth—to imprint the score with personality without straying into cliché. More than anything, it is the way the music reflects the psychology of its subjects." The result is a compelling, hard-hitting, serious orchestral work.

Intrada released an album at the time of the film, running just over 44 minutes and featuring a tremendous amount of creative assembly by Kamen. This program is preserved on disc 1. While the complete session recordings are missing, the Kamen estate was able to provide nearly every final take of the score, which is now presented in film order on disc 2, including some 10 minutes of previously unreleased music, the main title being one of the most significant.

Directed by Nicholas Meyer and starring Gene Hackman and Mikhail Baryshnikov, the film (originally known as Dinosaurs, then Russian Roulette, before settling on Company Business) opens with semi-retired CIA spook Sam Boyd (Hackman) marking time with industrial espionage for a cosmetics corporation. He is recalled to service by Elliot Jaffe to carry out a covert swap of imprisoned spies. The swap is to take place in the subway tunnels underneath Berlin. When Boyd uncovers a conspiracy tied to the mysterious disappearance of an American professor, the swap goes violently wrong and the spies become fugitives from Americans and Russians alike.