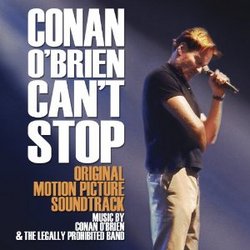 Performed by
Conan O'Brien and the Legally Prohibited Band

Music by Conan O'Brien & The Legally Prohibited Band. After a much-publicized departure from hosting NBC's Tonight Show, O'Brien hit the road with a 32-city music-and-comedy show to exercise his performing chops and exorcise a few demons. Filmmaker Rodman Flender's documentary, Conan O'Brien Can't Stop, is an intimate portrait of an artist trained in improvisation, captured at the most improvisational time of his career. It offers a window into the private writers room and rehearsal halls as O'Brien's "Legally Prohibited From Being Funny on Television Tour" is almost instantly assembled and mounted to an adoring fan base.