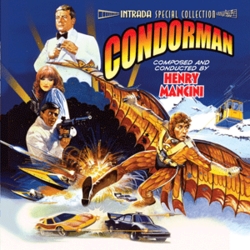 The 1981 Disney film Condorman features a tremendously energetic score by composer Henry Mancini—his first film for Disney. Mancini's Condorman theme is genuinely thrilling from the start, with its pulsating rhythms, syncopated stresses, and exuberant bridge passage. It's the musical equivalent of Condorman's boundless optimism: no matter how bad things get, he's ever ready to rush in and set things right.

The dynamic Condorman theme gets plenty of play in the score, covering wild car chases, staging explosive rescues, and ultimately soaring through the skies in a fully functional Condorman costume. For the evil Russian agents, Mancini provides a growling line with stepwise motion and a distinctly Slavic inflection. But the heart of both film and score is the character of Natalia, who winds up falling in love with her dashing rescuer. Mancini's sumptuous theme for Natalia is certainly among the loveliest romantic themes written for a comic adventure.

For this premiere release of Henry Mancini's dynamic score in vivid stereo, the Disney engineering crew made new digital transfers of the entire multi-track sessions for Intrada. Every session roll survived in beautiful condition, including the choral "Con-dor-maaaaan" overdub sessions held after the orchestra sessions had been completed. The entire score is presented on this CD, including full-length versions of cues as written and recorded by Mancini prior to the picture's post-production editing.