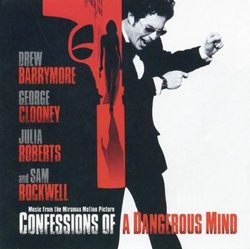 Confessions of a Dangerous Mind

Review: Confessions of a Dangerous Mind

by Dan Goldwasser March 6, 2003
3 / 5 Stars
Confessions of a Dangerous Mind is based on the autobiography by game show host Chuck Barris, in which he purported to be a CIA operative. The soundtrack contains a rather enjoyable selection of period source songs from the 1960s and selected score tracks by Alex Wurman.

From such oldies as "Palisades Park" and "Sunshine Supeman", we also get some bachelor-pad faves including Yma Sumac's "Gopher Mambo" and Esquivel's "Mucha Muchacho". Leave it to director George Clooney to decide to use the Rosemary Clooney version of "There's No Business Like Show Business". Wurman's score starts off light and jazzy, with a taste of lounge, and then gets progressively darker through the three tracks.

Running a short 40-minutes, I would have preferred more music on this album, but it's a very satisfying listen, even if it ends with a passable re-mix of the Gong Show theme by Peas. Pick it up if you enjoyed the film, otherwise you can probably find the songs elsewhere.