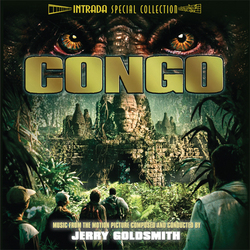 Jerry Goldsmith took the unusual step of opening the 1995 Paramount film Congo—a high-tech and violent, special effects laden action film—with a song. "Spirit of Africa," performed by Lebo M, starts the adventure, providing the seed for a long-line adventure melody that plays throughout the score.

The approach may seem counter-intuitive—creating a bright and sunny opening for a movie about murderous gorillas, and yet Goldsmith also wrote some of his most ferocious action music of the '90s as well. He surrounded the film with a magnificent theme for French horns; a beautiful line for Amy, the gentle gorilla; and the stirring work for orchestra and chorus with Lebo M that frames the score. Peppered throughout are exciting and explosive sequences that give the score a striking edge.

When it came time to selecting highlights for the Epic Soundtrax CD that coincided with the picture's release in 1995, Goldsmith left off much of this exciting action music. In fact, he selected approximately 25 minutes of the score, framing the 33-minute album with "Spirit Of Africa," just as he did the film.

Absent were the propulsive "Meet Monroe Kelly," the brief but intense "The Eye," the riveting "Amy Has Bad Dreams" and perhaps the most aggressive cue, "Help Me." The use of music in Congo was altered during postproduction more extensively than usual, but compliments of Paramount, Intrada had access to the complete unedited sessions, allowing for the inclusion of every re-scored or deleted sequence.