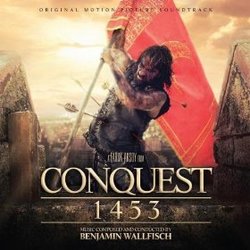 Conquest 1453 is the most succesful film ever in Turkey and the film is currently the second most popular 2012 film on the Internet Movie Database with only Underworld: Awakening receiving more votes! The exciting story of the siege of Constantinople in 1453 is a Turkish national epic, and Faruk Aksoy's film makes this piece of history accessible using a spectacular Hollywood-inspired cinematic style and a first-rate international orchestral score by Benjamin Wallfisch.

MovieScore Media has released two scores before by the talented British composer/conductor (Dear Wendy and The Escapist), but there is no doubt Conquest 1453 is the most epic and action-packed we've done with him. Wallfisch's music is as always rich in colour and counterpoint, employing several strong themes and a rich pallette where the orchestra forms the backbone and inventive electronic programming adds a contemporary feel to the score. If you are a fan of big, bold and exciting movie music in the action/adventure genre, this one is definitely for you!

The first edition of the CD is limited to 1,000 copies.