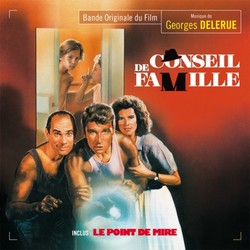 After several mainstream political thriller, Greek-French film director Costa-Gavras wanted to try his hand at the comical genre with Conseil de famille, starring Johnny Hallyday, Fanny Ardant and Guy Marchand. For his unique collaboration with the film director, Georges Delerue delivered a rich and colourful score. His distinctive personal touch can be found in the numerous romantic motifs and themes: the cello theme, associated with the character of Marianne, with its exacerbated and tortured romanticism, the theme associated with Sophie with its great modal melody and Martine's theme with a delicate flute motif that is just as typical of Delerue's style. The tension conveyed through some pieces, such as Suspense, Premier chantier or Les bulgares se déchaînent, with their pizzicato strings and dissonances, reminds us that the film, in spite of its off-beat comical tone, drags us into a dangerous outlaw world. The reoccurring presence of synthetic tones, quite unusual for the composer, in some versions of the main theme, portrays the male characters with a vigorous rendition.

Inspired by a Pierre Boulle's novel, Le Point de mire was the first film of the Belgian director and screenwriter Jean-Claude Tramont. Georges Delerue composed a score dominated by Danielle's theme, the main character performed by Annie Girardot. Played on accordion, the piece is more characteristic of the composer's writing style. For Jacques Dutronc's character (Julien's theme), Georges Delerue composed a theme entrusted to a transverse flute playing in the low register over violin pads and ethnical percussion. Sprinkled with dissonances, tense strings and light electronic effects, the music also highlights the dark and pessimistic quality of the film.

This expanded edition has been fully remastered from the original recording sessions courtesy of Delerue's archives. For Conseil de famille, the composer's back-up sessions tape was provided for this expanded edition (the only surviving source in reasonably good condition). The CD comes with a 12-page booklet with liner notes by Sylvain Pfeffer, discussing the films and the scores.