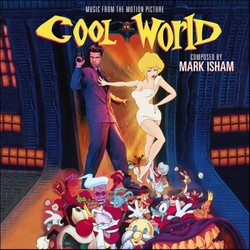 Performed by
The Munich Symphony Orchestra

Track Listing Legend:
* Does Not Appear In the Film

Isham provided a frenetic score written for swing band, traditional orchestra and electronics, all perfectly assembled in one of his most special and imaginative works. The music was recorded by The Munich Symphony Orchestra and a great number of jazz soloists, including Dave Hartley at piano and Isham himself playing the trumpet. Not all of the music was well treated in the film, however: some cues were edited, cut, re-cut, and others removed and replaced by new compositions by John Dickson.

Varčse Sarabande released a CD at the time of the film's premiere with a generous running time of 60 minutes. Now, we are proud to present the actual score as Isham conceived and recorded it for the film, including many previously unreleased tracks, different edits, mixes and alternates. All of John Dickson's tracks are included here as well, plus the remastered original Varčse album that was originally produced by Isham. All of the material is presented in stereo from pristine-condition digital scoring session mixes courtesy Paramount Pictures. The lavish 20-page full color booklet includes liner notes by Jeff Bond.