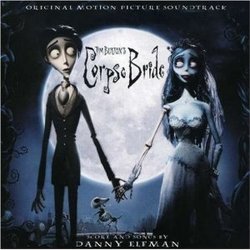 This has been a banner year for fans of Danny Elfman\'s scores for Tim Burton movies. Just two months ago we were lavished with the treat that was Charlie and the Chocolate Factory. Elfman successfully merged what some have taken to calling his two styles, gothic strings and computerized percussion, into one of his best scores. On top of the score, as icing on the cake, there were also the perfectly rendered settings of Roald Dahl\'s delightfully satirical songs.

Now we have Corpse Bride, a return to the style of Nightmare Before Christmas, a score that remains one of Elfman\'s most cohesive works. Like the earlier movie, Corpse Bride is a work of stop motion animation that strongly evokes Edward Gorey\'s darkly tongue-in-check Victorian drawings. It mixes the living and the dead for a charming story of misfits learning to fit in. And it features song and dance numbers that perversely and delightfully skew the Disney tradition of animation.

Elfman has expanded his compositional palate in the past few years and it definitely shows in the score for Corpse Bride. Put simply, this is a stronger score than Nightmare Before Christmas. It has a depth of harmonic inventiveness and melodic interplay that frankly surprised me because the score is mainly built around one melody. The clearest statement of that theme comes in "Victor\'s Piano Solo," where the protagonist, thinking himself alone, begins to play the piano. The theme he plays fits perfectly with the movie\'s Victorian aesthetic (an aesthetic mirrored in the main character\'s names being Victor and Victoria) as it is a salon piano work reminiscent of Chopin and countless Romantic Era imitators. The theme, accompanied by minor chord arpeggios that constantly shift and curl underneath, focuses on a repeated note pattern and ever-expanding trips away from that center. It is a simple theme, but in the transformations of that theme Elfman delivers both narrative and melodic drive. For ease of hearing his deft manipulations, listen next to "The Piano Duet," a scene late in the movie where Victor has come to accept that he has lost Victoria and could live with Emily, the Corpse Bride. Emily begins to play a wandering melody that is structurally related to Victor\'s piano theme. As Victor joins her at the top of the piano, we hear him make his decision to stay with Emily as he slowly takes her piano theme and turns it into his own by completing her phrases and conclusively cadencing. The two then engage in a frenzy of playing that is abruptly cut short, letting us know musically that Victor will make his choice to stay with Emily, but will ultimately win the life he deserves before we see that progression played out on screen.

These sorts of touches abound throughout the score, demonstrating Elfman\'s comfort with Burton\'s visual language and story telling practices. Elfman constantly supports both through the music, which is the mark of an excellent score.

As if that were not enough, there are the four new original songs. Overall, the songs are not as strong as those in Charlie and the Chocolate Factory nor as central to the plot as the songs in Nightmare Before Christmas, but, again, they do follow the movie\'s design. Burton chose to color the land of the living in drab greys, blacks, and browns. The land of the dead is a complete contrast, as it is a riot of color and sound, and Burton saved most of the interesting camera angles for the scenes set there. Elfman followed suit by opening the movie with "According to Plan," a song sung by Victor and Victoria\'s parents providing the audience with necessary background. The song, accompanied by harpsichord, is four-square with regular rhythms and phrases. There is clever wordplay, but overall it could fit perfectly well in any mid-century Broadway production. The second song, "Remains of the Day," serves a function similar to "According to Plan" by providing backstory for Emily, but from the beginning it announces itself as something new. The xylophone plays an asymmetric rhythm until the piano comes in backed occasionally by horns. This is old-style jazz with its constantly shifting meters and tempi and is as musically different from the music of the land of the living as the colors are visually different.

The best song of the score comes with the last one, "The Wedding Song." Although it begins much as "Making Christmas" did in Nightmare Before Christmas, it quickly breaks off into a spot-on parody of Gilbert and Sullivan operetta. A woman\'s chorus sings in harmony juxtaposed with solo parts that play off one another and throw out their words almost as fast as you can hear them. It all climaxes with the wedding procession, a chorus part that plays with our expectation of Wagner\'s wedding march by weaving in fragments of the famous piece until a true statement occurs at the song\'s end. It\'s such a successful blend that I can see it getting quite a bit of play at goth weddings in the future.

Overall, Elfman has constructed a wonderful score with a handful of good songs that serve the plot, but never rise to the level of earlier efforts. Still, after waiting twelve years it is a pleasure to revisit the feel of Nightmare Before Christmas and see some new touches added on. Let\'s hope we don\'t have to wait that long again before the two collaborate on another animated feature.