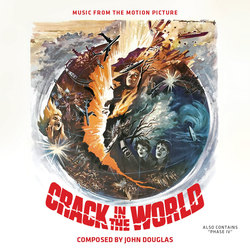 Crack in the World / Phase IV

Both scores make their premiere CD debuts here, with Crack in the World's composer John Douglas fashioning a traditionally rousing and richly dramatic orchestral ride, while Brian Gascoigne's Phase IV heads in another, but no less compelling direction, with pioneering electronic and acoustic sonics creating a soundscape for the striking imagery in renowned graphic artist Saul Bass' experimental directorial debut.

NOTE: Crack in the World was sourced from 35mm, 3-track mono DME stems, and as a result, some dialogue bleed-through can be detected. The acclaimed Phase IV program presented on the recent Waxwork Records LP release was recreated for this CD by Doug Schwartz, from Waxwork's unmarked, unslated source files.