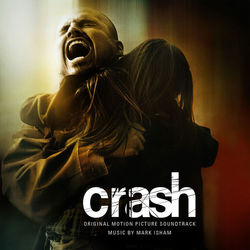 Let me begin this review of Mark Isham's score to Crash with a confession: I was, for a time, a subscriber to Mr. Isham's newsletter, though I had, at the time, never purchased one of his albums. I subscribed to the newsletter because (a) I was a teenage film music geek who'd read anything he could get his hands on that even remotely related to said topic, and (b) it was free. When I moved, Mr. Isham's people obviously realized that they wasting precious paper on someone who merely skimmed the pages of Spit-valve ... or perhaps it just wasn't forwarded. (I'm terrible with forwarding addresses, or anything that might involve actually having to speak to an employee of the Postal Service). What does this story say? Simply that in all of my obsessing over the next Williams, Elfman, Goldsmith or Goldenthal score, I simply didn't pay much attention to Mr. Isham's work. I rarely noticed his scores in the films for which they were written, and never bothered to listen to them independently of said films. I was indifferent to his work.

I saw Fly Away Home and loved the score passionately. Still, it didn't feel at all as though I loved a "Mark Isham" score - it still felt like a fluke. (Maybe he just has a good orchestrator, I told myself as I was becoming far more cynical at this age.) I was still far from a Mark Isham fan. I wish I could say I hated his work. Passionately. That would make my words here all the more resonant.

For you see, I am in complete awe of Mark Isham's score to Crash. Loving this score is very much like my experience viewing the film: it is challenging, surprising, moving, and ultimately cathartic and uplifting. Among the attributes it lacks - in addition to an orchestra or acoustic instruments or performers in any large numbers - is the air of preachy sentimentality that could have easily brought down a film such as this. A film so delicate as this requires the most delicate of touches from a musical standpoint, to the point that most composers would have - understandably - written mere musical wallpaper. What impresses about Isham's score is that it is perfectly married to the film while standing alone as one of the finest albums Brian Eno never made.

The film is far from subtle in its depiction of racial tension in Los Angeles, but subtlety is the touchstone of Isham's effort. Indeed, he has called it a score created "in the bedroom," with very little music budget and performed almost entirely on his own. The album is an ambient music lover's delight, but with far more emphasis on melody and less detachment than most entries in that particular genre. ("A Really Good Cloak" re-affirms that if there's a single harmonic progression that invariably puts a lump in ones throat, it's I-iii). The score is entirely electronic, save for a few well-placed vocals. The volume is consistently in the green, which makes the few crescendos all the more rewarding and powerful. The only musical misstep the film took was the use of Bird York's "In the Deep" over the climactic montage - a film which stands so well on its own merits needn't invite more comparisons to "Magnolia" than it absolutely has to. Stereophonics' "Maybe Tomorrow" is a fine way to end the album, and may very well have made a better finale piece than "In the Deep." It ends the album quite nicely.

Why all of the gushing? In short, it's because I feel like I've been dragged to a big-tent Mark Isham Revival by a friend and realized that I actually love what I'm hearing. I've seen the light, and like Crash, it's transcendent.