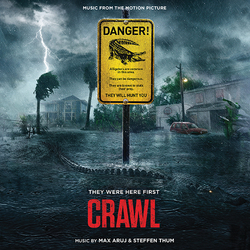 Intrada announces the CD release of the soundtrack to Paramount Pictures' 2019 thriller Crawl. The score by Max Aruj and Steffen Thum is low and rarely drifts from the low range of its composition, capturing the dreaded feeling of being trapped in the low space beneath a house, with a storm raging outside and the water level rising. It also captures a sense of the large, menacing creatures that occupy that crawlspace, similar to the low strings in Jaws. In fact, jabbing cellos are prominent in the score, with cello solos by Peter Gregson. It's a contemporary horror score, featuring a mix of synth and acoustics, relying more on an atmospheric soundscape than melody in one of the top thrillers of 2019.

In the beginning of the film, a massive hurricane descends upon a Florida town. Competitive swimmer Haley (Kaya Scodelario) circumvents road blocks enforcing an evacuation order to find her missing father (Barry Pepper). She finds him trapped in his home's crawlspace, held captive by a pack of gigantic alligators – a realization that comes too late as Hayley herself becomes trapped. The pair must fight not only the alligators but also the rising water as the crawlspace slowly fills up. It's human against nature against beast, in what is the perfect storm.