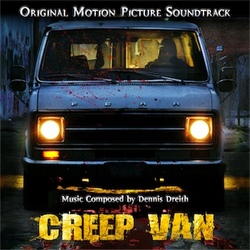 The second feature by the film makers, who brought you the nightmarish Gag, again features a score by Dennis Dreith, probably best known for his music to the Dolph Lundgren actioner The Punisher.

Not nearly as dark as Gag, Creep Van features a wide range of music, from rock to surf to sitar to heart pounding horror and a killer End Credits song by Brian Stewart (Harley Krishna from the Gag soundtrack), who co-composed some of the tracks.