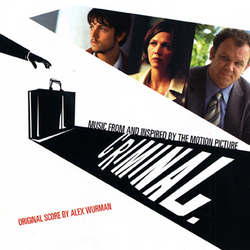 Criminal is a 2004 film based upon the Argentine film Nine Queens. Directed by Gregory Jacobs, it stars John C. Reilly, Diego Luna and Maggie Gyllenhaal and is a production of Section Eight, the production company of Steven Soderbergh and George Clooney. Original Score composed by Alex Wurman (Hollywood Homicide, Hero, Anchorman, March of the Penguins, What Doesn't Kill You and The Nines).

Jazz/Funk score and Crime/Heist films go together like a red hand in a well-used black glove. In the score for Criminal, Alex Wurman tosses his musical hat into the genre where composers Henry Mancini, Lalo Schifrin and Isaac Hayes have all traveled before. Wurman's music is atmospheric, slick, and occasionally sleazy, with a dash of hip-hop edge, but not in any overwhelming manner.

Interestingly, the opening and closing tracks are the strongest here - employing a theme which serves as a kind of ghetto-Bolero that rises and falls with a subtle, suave menace. This pulsing theme is revisited in the track "Bookworm". Wurman's score overall is certainly funky and eclectic, and appropriate background to the Criminal setting, though his music tends more to fade off or more simply, end, which tends to give the feeling that the majority of the tracks herein are fairly interchangeable within the vision of the film.

The album also includes a few pieces of pleasing lounge jazz source music, which thankfully, tend to fit in more with the music, rather than stick out as the tracks you'd rather avoid. Outside of the film, the music is a good listen, and if you've enjoyed the aura of music encapsulated in films even as recent as Jackie Brown and Ocean's Eleven, then this is the album for you.