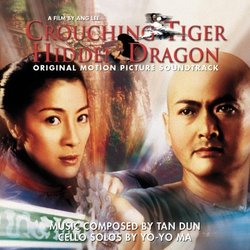 Crouching Tiger, Hidden Dragon is director Ang Lee's first venture away from drama into martial arts action films. The result is a steadily paced drama with well-choreographed action scenes carefully placed throughout. In this story of two martial arts masters (Chow Yun Fat and Michelle Yeoh) trying to rein in a gifted but petulant thief who steals a sacred sword (Zhang Ziyi), the long, sometimes tedious dramatic sections are suddenly livened up by a mix of martial arts and superhuman aerial acrobatics.

World-renowned Chinese composer Tan Dun's talent for combining Eastern and Western music is well utilized here. Reminiscent of a similar combination in The Last Emperor, this score combines the rich cultural textures of Dun's homeland with the powerful dramatic musical rhythms of the West. The Westernized elements of the score guide us through the drama emotionally while the traditional Chinese elements root us in the world Lee is creating. (The latter elements are not without emotion, but they do add more to the atmosphere than to the drama itself.)

With powerful cello solos by Yo-Yo Ma, Dun's score brings both a sense of adventure and a sense of underlying melancholy. A track like "A Wedding Interrupted" drives us through an exciting scene of martial arts intrigue with deep percussive beats. Then, in the same score, tracks like "The Eternal Vow" and "To the South" give us a firm sense of where we are with striking Chinese melodies. Lee does far more with utilizing the Chinese landscapes here than most resident directors ever would (especially the beautiful sequence in a bamboo forest), and Dun's score adds to this richness. The most intriguing piece is "Through the Bamboo Forest," in which Dun uses the instruments well to evoke the precariousness of the characters dancing through the forest canopy.

The only weak point to the soundtrack is inclusion of the pop piece, "A Love Before Time" (both English and Mandarin versions) at the end of the album. Sony Classical appears to be following the marketing lead of Titanic, but even so, a modern, sappy pop piece tacked on to the end of a period film rich in Eastern traditional and Western classical music just seems misplaced. The reason why the Celine Dion song in Titanic worked is because it is a memorable, moving work; this piece is mediocre at best, and is not worthy of Dun's otherwise exceptional score.

My main criticism of The Last Emperor's score, which I love, is that it stands out too much as music separate from the film, whereas Dun's score for Crouching Tiger, Hidden Dragon is a powerful musical work, but still always serves the film it is part of; because of that, it is more successful as a soundtrack. It is a well-balanced, emotional score that evokes not only the story but also the whole world that this unique film creates.