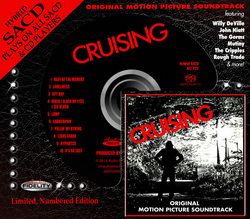 Available on Compact Disc for the First time! The controversial 1980 film Cruising has become an underground cult classic. One of the best parts of the film is the amazingly gritty soundtrack. The music was scored and compiled by Academy Award-winner Jack Nitzsche also known as the "Wall of Sound" arranger on Phil Spector's hits.

Most of the songs on the soundtrack are a mix of rock, glam and disco music and full of an anxious energy. They complement the movie action and the S&M bar setting extremely well and offer a glimpse of an un-idealized 70's gay scene. The tracks are performed by various punk, P.Funk, rock, pop and soul artists including Willy DeVille, John Hiatt, Rough Trade, The Cripples and several raw and dirty cuts by proto punks The Germs.