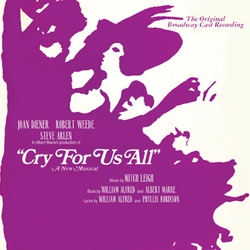 Cry For Us All

Hopes were high for Cry For Us All—after all, it was adapted from the hit off-Broadway show, Hogan's Goat, which had run two years (and starred Faye Dunaway, Ralph Waite, Cliff Gorman, and Conrad Bain), it had music by Mitch Leigh, who'd just had a smash hit with Man Of La Mancha, it had La Mancha's director, Albert Marre, La Mancha's leading lady, Joan Diener, and the brilliant star of The Most Happy Fella, Robert Weede. The book was by Alfred (with Albert Marre), and the rest of the cast was stellar, with Steve Arlen, Helen Gallagher, Tommy Rall, and many others.

But, after a troubled out-of-town tryout, during which many changes were made, the show opened at the Broadhurst Theater on April 8, 1970 (where it followed Woody Allen's Play It Again, Sam), and closed after only nine performances. Perhaps a serious musical melodrama set in 1890 Brooklyn about the trials and tribulations of some power-hungry Irishmen just wasn't what the tired businessman of 1970 was interested in. Despite that, the show was nominated for two Tony Awards—one for best actor in a musical (Robert Weede) and one for set designer Howard Bay (also from the La Mancha team).

The fact is, listening to the tuneful and sometimes operatic score holds many pleasures, especially when the songs are delivered by the brilliant Robert Weede, Joan Diener, and Steve Arlen, along with Miss Gallagher, Mr. Rall, and the large supporting cast. Leigh's score to Man Of La Mancha had been like a breath of fresh air on Broadway (and hearing it every time the show is revived, it's still like a breath of fresh air), and Cry For Us All is filled with his signature rhythms and meter changes and it affords Weede, Diener, Arlen, and company meaty opportunities to dig in to Leigh's tuneful and soaring melodies.

So, discover the delights of Cry For Us All—available for the first time on CD.