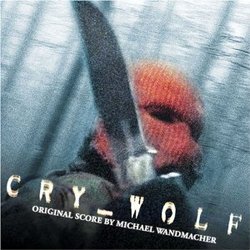 Buttrock goa. Darkwave. Detroit Techno. Gloomcore. If these names mean something to you, your knowledge of the various branches of electronic music is already better than mine. If you can actually write an essay on the obvious differences between each of these styles, then this review is most assuredly not for you.

It is always with great difficulty that a reviewer undertakes the task of critiquing a score which delves into an area of music with which the reviewer is not familiar. I already mentioned this predicament in my review of Marianelli\'s Pride and Prejudice and I am faced with the same one here, listening to Michael Wandmacher\'s mostly-electronic score to Cry_Wolf.

According to the composer himself, the score was born out of hours upon hours of hard work, recording actual bowie knives in a studio, manipulating sounds, deliberately creating a finely-tuned sound palette. He has described the process as more painstaking than anything else he has ever undertaken, including works for large orchestra and chamber ensembles.

In a first draft of this review, I called the score "aggressive, overbearing, and almost annoyingly modern" and even now, knowing what I know about the creative process that went on to make this score, I have to stand by those words. They reflect an opinion, human, fallible, and entirely subjective. I personally would rather hear the sound of a cello than that of an electronic beat any day. I prefer Penderecki\'s orchestral experiments in atonality and dissonance to a techno song, no matter how well crafted. As such, I am probably the last person who should be reviewing the score but here I am.

The film is about a fictional serial killer created on the Internet and using instant messages in lieu of the breathy phone calls of yore, so it is somewhat inevitable that the score draws its inspiration from the electronic side of the barrel. The first quarter of the album is enjoyable. After the loud and violent "Her Last Breath", we are introduced to the main theme in "Main Titles" and, while it follows the most basic rules of harmonies by the book, it is catchy. This theme comes back in "Creating a Killer" and "The Missing Backpack" but I wish it had been a more integral part of the score. The most pleasant surprise, however, comes in the form of "Owen\'s Theme", another short but catchy theme, this one for cello, which makes a pleasant appearance in "Dead Man Walking" and comes back, reinterpreted as a fast duet for violin and cello, in the final track "Epilogue". Its expert combination of solo strings and modern beats reminded me of the musical atmosphere of a movie like Cruel Intentions.

The middle chunk of the score, with a few exceptions, was too much for me to handle. Too much in the realm of electronic beats overlapping one another, of synthesized bells of all caliber, of sparse strings, of shakers, of every electronic percussion known to mankind. Regardless of the amount of work that went into making these sounds and putting them together, I felt assaulted, which I guess was the idea seeing as this is the score to a horror movie. There is, however, a difference between the score as heard in the film and the score as a stand-alone listening experience and, for me, the CD was simply a never-ending geyser of electronic chase cues that rapidly got on my nerves.

If you like scores that deliberately pull themselves away from traditional orchestras and acoustic elements, then Cry_Wolf might be for you. I can only speak for myself when I say that most of this album grated me. It was fifty-eight minutes of almost non-stop beats and electronic effects and it was too much to digest. Cry_Wolf is serious about its electronics and might only appeal to a very select audience.