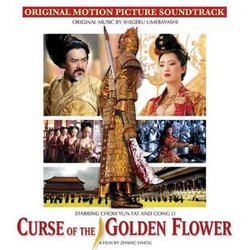 Curse of the Golden Flower

Review: Curse of the Golden Flower

It\'s amazing what the aftershocks of one film will be. Few would dispute that Crouching Tiger, Hidden Dragon marked a turning point for the wuxia film genre. For western audiences whose sole contemporary exposure to the genre was Jackie Chan\'s stunt-heavy slapstick or Jet Li\'s historical action films, the combination of narrative sincerity and Orientalist elegance in Ang Lee\'s film proved irresistible. The film was the hit of its year with multiple Oscars, and while each film surely stands on its own merits, it created a Western marketplace for subsequent high budget wuxia spectaculars like Hero (one of the most aesthetically-arresting films of last ten years), House of Flying Daggers (fantastic entertainment), The Promise, The Banquet, and now... Curse of the Golden Flower.

The music of the wuxia revival has proven an important part of each films\' success, mining that evergreen market of western music lovers who like nothing more than a blend of a western approach to melody with Oriental instrumentation and harmony. Tan Dun brought his concert hall credentials and some celebrity instrumental collaborators (Yo Yo Ma, Itzhak Perlman) to the Oscar-winning orchestral score for Crouching Tiger and (in my opinion) the superior Hero. (His score for the Zhang Ziyi-starring Hamlet-adaptation The Banquet, utilizing Lang Lang\'s deft piano mastery, is currently available on Deutsche Grammophon.) Of course the other contender for in-house composer in this genre is Shigeru Umebayashi, a film composer whose origins, like Ryuichi Sakamoto, lie more in progressive rock than the concert hall. His House of Flying Daggers score offered a priceless love theme reminiscent of Nino Rota, adorned beautifully with Chinese flutes, string solos and a lush string orchestra.

Sadly his music for Curse of the Golden Flower is not likely to attract anywhere near the same acclaim. Curse\'s director was the same Zhang Yimou whose Hero and House of Flying Daggers rode most successfully on the coat-tails of Crouching Tiger. The film is actually more a political revenge melodrama than a lush action film - akin to Hamlet, Ivan the Terrible or The Lion in Winter - with stylised combat scenes to bring home murderous court intrigue to broader market. This underlying narrative difference from Crouching Tiger and House of Flying Daggers has a fairly significant impact on the score of the film, which proves to be a fairly constant blend of turgid and over-bearing.

The airy vocals, churning celli and echoing light percussion of "Opening" set the tone for the ominous music. An enormous mixed choir blast out the "Tai-He Song" with the gravity befitting Chow Yun Fat\'s divine emperor. And those vocals rarely let up - set against various percussion ideas in "Theme of the Emperor", "Return to the Palace", "Empress\'s Palace", and just about every second track. The overuse of choirs of various shapes and sizes in this score is a real weakness - every moment feels as big as another, and it seems like there\'s no design to any of it.

Those softer interludes that do come - such as the haunting string and flute elegy "Again", or the brief "Portrait" - are welcome but rare. As in House of Flying Daggers, the action scoring runs hot and cold. Some cues really work - "Heroic Battle" (how\'s that for a functional title?) and "Imperial Ceremony" - while others feel like they wouldn\'t be out of place in Kenji Kawai\'s Seven Swords or a Pirates of the Caribbean score. None of it is truly bad, and some of it is more engaging than the composer\'s work on Jet Li\'s Fearless, but next to Tan Dun\'s orchestrations for cues of similar intent, the pounding bombast feels like going through the motions in a way it never really has before for this composer.

And yet, there is a theme, as there always is with this composer. Joining "Yumeji\'s Theme" (used famously in In the Mood for Love), "Zhou-yu\'s Theme" (from the Gong Li vehicle Zhou Yu\'s Train) and the love theme from Flying Daggers is this score\'s "Theme of the Empress". And it\'s a beauty - delivered by an arresting female soprano who particularly brings to mind Sumi Jo\'s vocalisations on Kilar\'s The Ninth Gate. It\'s not apparent at first, but over the course of the album, that subdued melody and its gradual chord progressions acquire an undeniable allure by the end. Few will be able to resist the searing dadi (flute) solo that tears at the heartstrings in the penultimate "Curse of the Golden Flower".

The arresting theme similarly leads the "Ending Title", one of the longest cues on album, and one which I wish was a truer summation of the score. (In other words, why wasn\'t it all this good?) By the end of that finale, when epic chorus and intimate flute solo are paired over the composer\'s trademark percussion, few who have a weakness for this genre of film music will be unsatisfied. It\'s emotional scoring in the extreme and those who care for subtlety may find it the most offensive material of all, but for me it\'s a rare moment when the score\'s pervasive air of gravity truly feels earned.

Fans of the composer may find it more compelling than others, but those after more exciting contribution to the genre are advised to purchase Tan Dun\'s The Banquet over this one. But do grab the last two tracks on iTunes if they\'re available.