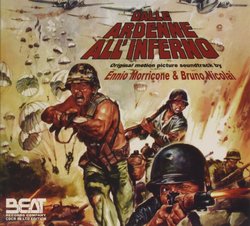 Beat Records makes use of a particular care for this miracolus edition fo the original motion picture soundtrack of the movie Dalle Ardenne all'inferno.

Previously edited in LP and CD, out of stock since a lot of time, was known for only 5 surviving MONO tracks. Recently we discovered in Nicolai's private archive the complete master tapes of the original recording session, in perfect conditions. That allowed us to bring to life more than 64 minutes of great music composed by the Maestros Ennio Morricone and Bruno Nicolai for the movie directed by Alberto De Martino.

A great orchestra playes the themes of the movie composed by two of the greatest musicians for cinema in a emotional crescendo on the background of the Ardenne's battle upon which the movie is based. A score that true fans of film music will surely appreciate finally available in a perfect quality with more than 50 minutes never released before.

The CD features a 2 folds DIGIPACK plasticized box in limited edition, numbered from 0001 to 1000 in the second page. Inside a 24x36 cm poster featuring original artworks, rare pics and liner notes edited by Claudio Fuiano