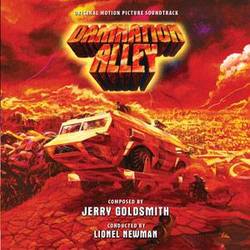 Intrada announces what is one of the last large-scale Jerry Goldsmith scores never before released in its entirety – the 1977 sci-fi extravaganza Damnation Alley. Restored from the original stereo session elements housed at 20th Century Fox, Mike Matessino, soundtrack restorer extraordinaire, carefully remixed and restored this release, bringing forth a fidelity that makes it sound like it was recorded just yesterday. Although the long missing electronic overdubs that Goldsmith recorded separately in his studio remain missing, Intrada turned to none other than Leigh Phillips, who has an amazing track record for restoring Goldsmith scores and was able to recreate as close as possible the sound of those electronics by consulting both the mono music stem supplied by Matessino and the original orchestral charts. All of the timbres using ARPs and Moogs would have been created by Goldsmith from scratch, causing a painstaking dilemma. As Phillips comments, "The number of 'variables' involved in this process is incalculable, and attempting to capture those sounds again is a bit like searching for a needle in several haystacks!" And yet the painstaking work paid off, as was evident after Matessino integrated the newly created synth tracks with the orchestra, resulting in the now complete score.

Julie Kirgo describes the score in her liner notes as a "sizzling mix of orchestral and synth effects: a potent cocktail..." Although a relatively brief score, it is jammed with '70s Goldsmith style action music that will make collectors swoon. Also included is an alternate version of "The Voyage Begins," scoring an action scene that was ultimately deleted from the film due to special effects issues.