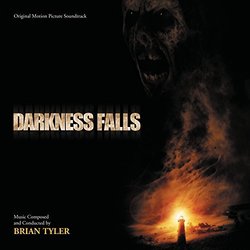 Darkness Falls was composed by rising composer Brian Tyler.  The best way I can describe this score is, in a word, big.  Recorded in the Saint Thomas Chapel at Bastyr University, the vast acoustics are fully realized in the opening track, "Evil Rises". This is the kind of music I imagine when I think of the action-horror genre.  In the vein of James Horner's Aliens, it's big, fast, loud and aggressive.  In this track, Tyler has composed a terrifying theme and it is played ferociously by the orchestra.  The music builds with an intense string section and exhausting brass clusters.  The music comes at you and doesn't quit (until 2:25 that is).  "Evil Rises" pretty much sums up the "terror" theme of the film.

After the terror rests, Tyler sets a somber yet brooding tone in the orchestra.  "Darkness Falls" sounds much like the brooding music he composed for the film Frailty.  Slow moving strings that have a suspenseful, supernatural quality.  This track pulls the audience into the spooky world of Darkness Falls.  Another notable track is "Interrogatorio".  Here, Tyler creates a "mystery" motif by utilizing the string section in the orchestra.  "One Kiss," is an interesting soft motif that sounds like a bittersweet love theme.  "End Titles" closes the album and restates all of these wonderful themes into a nice suite.

Aside from these few tracks mentioned above, the album is rather slow and repetitive.  Every now and then, the "terror" theme kicks in and creates excitement and driving suspense.  The biggest problem with this disc is that the first track sets the bar way up high, and the rest of the album never really manages to reach that level.  But, keep in mind that film music isn't meant to be exciting and listened to on its own; it's all about the context within the film. Brian Tyler's terror theme is enough to pick up this score.  This is only the dawn of his career and Darkness Falls makes me excited to see what he comes up with next.