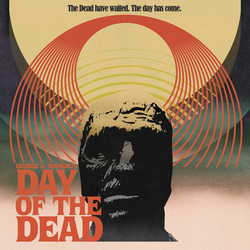 Day of the Dead

This release features, for the first time ever, every musical cue used in the film (over an hour's worth of music). Our source material for this release were the original 1985 master tapes. The tapes were restored and re-mixed by composer John Harrison and mixing engineer Michael Farrow. The score was then re-mastered for vinyl by former White Zombie guitarist, J. Yuenger.

There will be only 300 variants of Zombie Flesh and Blood vinyl available.

The full LP package artwork and layout (front and back cover, inner gatefold art, inserts, and center labels) has been created by Jay Shaw.

This limited release features essay length director notes from "The Godfather Of Zombies" himself, George A. Romero.

This release will also include an 11×22 replica of "The Dead Walk!" newspaper article from the opening credits of the film. The newspaper article was re-created by Jay Shaw and includes essay length composer notes from John Harrison.