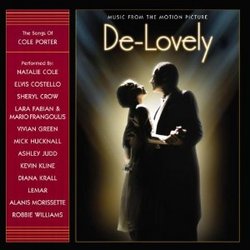 In movies featuring angels as characters, divine messengers either kill people, fall in love with them, or teach some portion of humanity a very special something about the meaning of life. I point this out because I haven't seen many movies with an eschatology depicting a song-and-dance Angel of Death. This observation has nothing to do with the De-Lovely soundtrack; I just thought it was an interesting framing choice for the film. Well, okay - as much as this stands alone among theatrical theologies, the film's soundtrack does the same. As will be apparent from the review, I greatly enjoyed the soundtrack. However, I will do my best to avoid those obnoxious "quote me" expressions like "De-Lovely was DE-lightful!" Yeah, I roll my eyes at those studio shills too.

Since the first song on the CD is by a male vocalist, I'll start with that gender. That first song is "It's De-Lovely" by Robbie Williams, a pop singer hugely popular over in the U.K. but relatively unknown here. He plays a wedding singer at Cole's wedding, with a raspy snarl underneath his voice. Awesome stuff for an ex–boy-band member. In the same vein, Elvis Costello portrays an animated bandleader doing a Dixieland "Let's Misbehave." From what I recall of his performance, it seemed like he had more fun in this role than his cameo in Austin Powers: The Spy Who Shagged Me. Lemar Obika, a British R&B singer, appears on a boat in Venice and serenades the Porter family and friends in "What is This Thing Called Love?" He croons in a silky smooth voice, even if his scene confused me. (Really, his character just shows up on a boat. And then on stage! And then he's on the boat again!) Mick Hucknall, yet another well-known Brit, quite devotedly exquisitely sings the ballad "I Love You." The final show-stopping "Blow, Gabriel, Blow" in the Angel of Death's theatrical demesne by Jonathan Pryce summons up old-school Broadway.

The solo female artists are powerhouses as well. Alanis Morissette definitively absolutely blew my ears away with an exuberant "Let's Do It (Let's Fall in Love)." Hands down, this was my favorite track on the album. She inserts a fabulous tremolo into the lines that's unlike anything I've ever heard from a contemporary pop singer. Sheryl Crow follows in the one-two pop songstress pitch by performing an incredibly lush "Begin the Beguine." Diana Krall, Mrs. Elvis Costello no less, inhabits a Hollywood chanteuse (rowr), delivering performing a peppy yet flirtatious "Just One of Those Things." She sings it more playfully than Louis Armstrong does in his well-known cover.

Initially, I wasn't too enthused with the nasal version of "Anything Goes," perhaps the definitive, er, textbook Cole Porter song. But then I realized that Caroline O'Connor (cheat sheet: Australian musical theatre performer) was channeling Ethel Merman, so that made a lot more sense in retrospect. Natalie Cole randomly shows up to interpose a tremendously depressing bittersweet "Ev'ry Time We Say Goodbye." There must have been dust in the SoundtrackNet listening room, because my eyes kept tearing during the song. Neo-soul journey(wo)man Vivian Green sings a devastating smoking, emotive "Love For Sale." Unfortunately, as I was listening to the end of this tale of prostitution, I heard a glitch at 05:09 into the track. Upon repeated listening for this review, I found it impossible to not hear the chirp - extremely frustrating. The chirp reappeared during the duet between Lara Fabian (Canadian signer) and Mario Frangoulis (young Greek opera singer). I'm not sure if this is a mastering flaw or an anti-piracy measure, but it's damn annoying.

As Cole Porter himself, Kevin Kline has several numbers on the soundtrack CD. He's not nearly a good a singer as the other artists in the film, but Cole Porter wasn't that good a singer. This can be verified by Porter's deceased beyond-the-grave performance of "You're The Top" at the end of the film - a little creepy, I think. Anyway, Kline's duet of "Be a Clown" is a hysterical sequence acted out on the MGM backlot with Peter Polycarpou's Louis B. Mayer. He starts off "Night and Day" in a duet, letting the belting John Barrowman take over. Conversely, desolate plaintive was his heart-rending duet during "In the Still of the Night" with Ashley Judd as his long-suffering wife. As hardcore and dispassionate are we professional soundtrack critics while watching movies, that scene totally made me sniffle. Some of that dust from the Natalie Cole tune must have drifted back into the screening room. «sniff» Judd appears in another duet on the beautiful yet simple "True Love," though I must admit that I don't remember its performance in the film.

So yes, this is such a fun album that I can't help but give it the full five stars we have here - the first time I've personally done so here in the rock/jazz/pop section of SoundtrackNet. I definitely emphatically suggest you check out this album. Hopefully, you won't suffer the audio flaws that marred my copy.