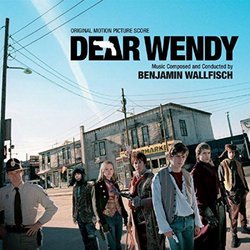 The most fascinating thing about Benjamin Wallfisch\'s Dear Wendy is actually what comes after the score. While I enjoyed the music he devised for the film, a desolate mélange of slightly off string harmonies, personal piano themes, and processed sounds, my ears only perked up after the "End Credits". Included were two bonus tracks, concert pieces composed by Wallfisch, which trounced what had come before. While he is successful at creating a mood for the movie about a boy and his love affair with a gun named Wendy, the intimate, always-on-the-brink-of-madness atmosphere acts as a damper for his real talent, which is showcased in the pieces "Prism" and "Discovery". "Prism" begins with a very quiet piano exploring its melodic world in an atonal fashion, with subtle crystalline hits punctuating the soundscape seemingly at random. The crystal effect intensifies as the pianist hammers the strings in a louder and lower fashion, the piece reaching a dark climax at the three-minute mark. Pizzicato strings erupt onto the scene like a hundred balls falling on the floor and scattering, introducing dueling violins reminiscent of Don Davis\' avant-gardiste concert work. The second concert piece, "Discovery", blew me away by taking the idea of a one-minute crescendo and reveal and adapting it for a modern classical audience. Traditional string figures descend and ascend over an insistent brass note before being swallowed whole by a gigantic cymbal hit. Majestic, Matrix-like brass calls mingle with Goldenthal-esque flute trills and flutters before the short exultation is brought to an abrupt stop by gongs and loud drums. This is modern music at its best. But I digress.

Dear Wendy is by no means a bad score. It exposes Dick\'s Theme for strings in "Showdown", a dramatic melody that is somewhat subdued but memorable. It comes back for solo piano in "Dick\'s Theme", along with the string and horn ensembles with a touch of electronics. It is elegiac in sound and well crafted, but already sounds like something we\'ve heard before a thousand times. "First Letter" introduces the second portion of the score, a series of processed sounds, like a piano hit stretched and reversed, coming at the listener like an artificial wave and suddenly receding, at once intimate and disturbing. "The Dandies" is by far one of the most interesting tracks, breaking away from the desolation and bringing forth an interesting, dynamic idea for strings just boiling under the surface before gaining in intensity, a series of complementing, flighty figures for the violins recalling "Ride of the Valkyries". Trombones enter at the halfway point with a heroic theme and this is the score\'s only true noble moment. At the other end of the spectrum is a cue like "Close Escape", a curious and post-modern mixture of wailing brass, hyperactive strings, and a processed electric guitar sound. "Final Tragedy" begins with Dick\'s Theme over harp and string accompaniment before the strings hark back to the Golden Age with melodramatic chords accompanied by a loud trombone lament and occasional timpani hits. As the chords keep shifting, the music dangerously walks on both sides of the line that separates "melo" from "dramatic".

Benjamin Wallfisch\'s score to Dear Wendy is good but demands a lot of attention as a separate listen. It is a personal score that rarely grows loud, an accompaniment to the subtlety of the beginnings of madness. It is being released as an iTunes exclusive by Mikael Carlsson\'s Movie Score Media, a company dedicated to bringing more obscure scores to the masses via electronic means, which are less costly than CD printings. What this also means is that the consumer can easily choose to download individual cues from the score instead of the entire soundtrack. While Dear Wendy is good, "Prism" and especially "Discovery" are better. Even though Wallfisch\'s movie career is only just beginning, I am already looking forward to hearing more of his concert works. With the right projects and exposure, he just might be the next Elliot Goldenthal.