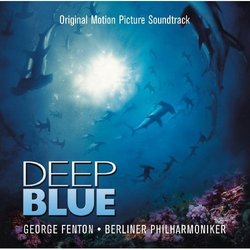 As the theatrical release of the BBC miniseries Blue Planet, musically, Deep Blue – as expected – is very similar to the original. George Fenton's score continues in the same vein, capturing the images and feel of the sea with his full orchestrations: often majestic, often quiet, and both dark and energetic when necessary. Without a doubt, there are some truly beautiful and extraordinary cues that will make you pause and go back to play them again, just to make sure you heard everything you thought you did (to find that you probably even missed a little on your first listen). There are a few motifs that filter through much of the album, the same motifs from the original, but as with Blue Planet, the score still reflects the track titles more than any specific cohesive theme; the score functions to capture the essence of each unit within the film rather than tie it together musically the way, for example, that Howard Shore unified The Lord of the Rings trilogy (not, certainly, to suggest that Fenton should have followed Shore's lead). The main "theme" first appears here in track three, "The Beach In Patagonia" and is again a descending two note motif that drops a fifth; one of the best moments of this score is the full brass cue at this track's end.

An aspect that I like of this score is that Fenton offsets his majestic orchestrations with a solo oboe, the presence of which is almost more prevalent than any one motif; this sound color is a marked contrast to the more energetic cues and captures the feel of the sea as well. There are also solo trumpets ("Bounty Hunters", "Showtime") and French horns for sound color. The horns in "Flying Emperors" actually mirror a three-note descending motif in the strings almost the way you might sing a round. "Polar Landscape" also uses the brass section well, building a dramatic orchestration with the brass out of the strings in a way that feels like it is about to break into the main motif, but never quite does. And perhaps the best rendition of the main motif is in the title track at the end of the album, much in the same way that the first track of Blue Planet established the motif.

And there are a fair number of tracks like that: it appears that Fenton wrote little brand-new music for this theatrical release, but didn't pull the same cues from Blue Planet either. He rearranged the original music to fit this version, but the similarities are rather obvious. "Bounty Hunters" is the same as "Sardine Run", "Coral Riches" very similar to "Coral Wonder", and at least three others. Many critics complain that composers recycle their old themes into new scores, but that's not what this is; rather, Fenton is scoring essentially the same project, but edited for a different medium so it makes sense to use the same or similar music.

However, my complaints from the original still stand. However much the film may be composed of separate sections about different subjects, I would have preferred the music to form more of a whole, to be more thematic; what is here is really mood music to fit each scene, which may work, but is just background. And on album, the good cues are not prevalent enough to make for a fully enjoyable listen. There is a lot of down time, and there are at least four tracks that don't do much musically at all.

Fans of Blue Planet will enjoy this album just as much as the first, for it is essentially the same. However, these people should not bother buying this second album for the same reason: it would be like buying Blue Planet again, unless you're planning to really listen closely. For those who may wish to buy one or the other, I may recommend Deep Blue over the original, simply because there are a couple tracks that are new, and Fenton's orchestrations seem to have improved this second time around.