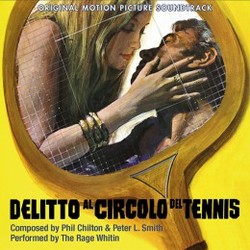 Quartet Records and Cinevox presents a complete score premiere of a forgotten Italian masterpiece of psychedelia!

Based on a novel by Alberto Moravia, Delitto al circolo del tennis, directed by Franco Rosetti in 1969, with cinematography by Vittorio Storaro, centers around four individuals: college professor Riccardo Dossi (Chris Avram), his lover Benedetta (Anna Gaël), his daughter Lilla (Angela McDonald) and student Sandro (Roberto Bisacco). The four of them will end up in a plot centered around sex, drugs, betrayal and even a murder gone wrong.

The fascinating score was composed by Phil Chilton and Peter L. Smith, and is performed by the band The Rage Within (named after the movie's English title). The film itself was shaped in a way to facilitate a contemporary pop score. Rosetti's narrative is deliberately light on dialogue which allowed for psychedelic montages and songs to comment on the action. Think of it as Zabriskie Point, but without the star power of Pink Floyd.

There has been an LP of the score with 14 tracks released by Cinevox in 1969 - one of the top rare and expensive Italian albums in the secondary market these days- but for this edition, we have included the original LP montage and also the unreleased complete score, all mastered by Claudio Fuiano from the original session tapes vaulted at Cinevox. The 8-page liner notes by Gergely Hubai discuss the film, the band and the score.