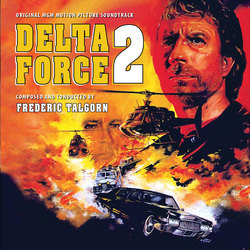 For Delta Force 2, composer Frederic Talgorn provided the flag-waving and emotional fireworks, eschewing the all-electronic approach by Alan Silvestri for the first film. Talgorn's muscular, orchestral score is a trumpeting main theme that's as much about the heroism on display as it is the relentless drive for justice. Talgorn was inspired to create this gladiatorial march after watching the bone-crunching, slow-motion training montage sequence. But as weighty as this thunderous theme is, Talgorn also gave it a fun, thrilling uplift as a skydiving theme, whether played by a full orchestra or on synthesizer.

Talgorn had planned to make Delta Force 2 an entirely orchestral score, with synthesized flutes used to augment certain passages. But budget cuts required him to use the muscle of his French players only in the film's "most spectacular" sequences; much of the score features a Los Angeles synthesist creating a symphonic sound from the composer's handwritten score. This electronic music is most effective at conjuring the tropical atmosphere of the fictional South American country of San Marcos, a treacherous jungle filled with eerie voices and bird-like cries and Latin percussion.

For this 2-CD set, Intrada presents the highly artistic album program Talgorn assembled for the original CD release as disc 2. The first CD contains the entire score (including 35 minutes of previously unreleased music) in chronological order. This presentation reveals the architecture of Talgorn's exciting music as a whole, showcasing musical ideas that weave in and out between the robust colors of the orchestra and the more focused tones of the synthesizer performance. The result is great contrast while still being highly cohesive, especially when the thematic elements are so unified throughout both idioms.