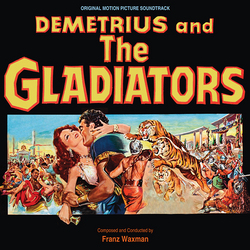 Demetrius and the Gladiators

In Demetrius and the Gladiators, one of the true pleasures of the film is Franz Waxman's tantalizing score, which, while incorporating several of Alfred Newman's incomparably majestic themes from The Robe, nevertheless manages to display a modernist élan and power all its own.

Demetrius and the Gladiators was this fabulously versatile composer's first Biblical epic; as usual, he adapted his talents to a new genre with superbly dramatic dexterity. Beginning with a pulse-pounding "Prelude" which twines Newman's themes with his own, Waxman moves on to one stunning cue after another.

Demetrius and the Gladiators has undergone a long overdue full digital restoration using the best that state-of-the-art audio technology can offer. Restoration and remixing was undertaken at 96k 24bit resolution. Sadly, three cues from the score had completely deteriorated by the time the original reels were transferred in 1997: "Kneel to Your God" (6m3/7m1), "Temptation" (7m2), and "The Kiss" (8m1). Using the original 4-track stereo audio for the film itself, we have rescued brief segments of these, which were unmarred by dialogue and sound effects and included them in the program in order to present as much of the score as possible. An additional excerpt of "Temptation," with sound effects but no dialogue, is included as a bonus track. Also in the bonus section is the deteriorated stereo version of the cue "Claudius and Caligula," while the main program features a more sonically palatable monaural mix.

Every effort has been made to bring out its original brilliance so that, as a listening experience, Demetrius may take its rightful place beside recent musical restorations of other Fox Biblical epics of the period. This release is limited to 1000 copies only