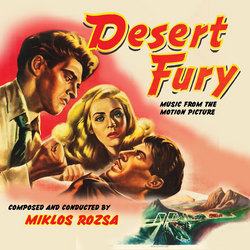 For the 1947 film Desert Fury, Paramount invested heavily in the music, budgeting nearly $44,000 for the composition and recording of the score. Miklos Rozsa, a recent Academy Award-winner already well established as the go-to composer for film noir, was brought on board. In typical Rozsa fashion from the mid-to-late forties, he used relatively brief, malleable motifs unlike the sort of long-lined, closed-form melodies that would glorify his 1950s historical/epic scores for MGM. This gives the music remarkable fluidity, allowing him to constantly manipulate his material, with a principal theme characterized by crisp dotted rhythms and an agitated, yearning quality in the melodic line.

As with Intrada's release of The Lost Weekend, selected cues from the original optical music tracks for Desert Fury were transferred to 35mm magnetic film long ago—but only recently discovered and digitized. Two cues were never preserved (the complete, original "Bridle Trail" and "Fritzie's Designs"). Of what remains, most survived in fairly good condition, although a few cues were too damaged to be transferred to digital. As a result, approximately 10 minutes of what Rozsa recorded for the film is gone forever, but—in compensation—nearly eight minutes of previously unheard alternates comprise the "Extras" section of this disc.