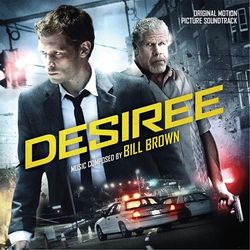 MovieScore Media teams up with Bill Brown to present a unique thriller score starring a hundred year old grand piano and cello solos by the world-renowned Tina Guo. Directed by Ross Clarke, Desiree takes place in the Deep South with a musical score that matches the tone of the Southern Gothic setting. Our main hero, Eric (Joseph Morgan) wakes up in a New Orleans jail accused of arson linked to an illegal drug manufacturing ring.. Suffering from amnesia, he's determined to find his girlfriend and an unexpected bail is just what he needs to start working out the mystery. Also starring Ron Perlman, Walton Goggins, Kate Walsh and Nicole Badaan in the title role.

"The score needed to reflect how Eric is haunted by fragments of memories, his confusion and frustration" explains Bill about casting the perfect instruments for the score. "I felt to really get inside that character musically, I needed an instrument in the studio that reflected all of that, so I bought this beautiful 100+ year old upright grand piano and set it up in my recording space. When I sent Ross 'I Remember', one of the last and most integral cues in the film, he got really excited. I remember playing it for him live to picture later in the studio. He told me it transformed the movie, and his emotional reaction inspired me to take the piece even further in the next weeks, bringing in my friend Tina Guo to perform the beautiful cello parts throughout. Every cue has meaning for me personally, as it relates to the depth of visual poetry Ross created with his film."

Composer Bill Brown has achieved great success in all forms of media with his compositions. His passion for composing is followed closely by his interest in cutting-edge sound technology. "In television, Bill scored all nine seasons of CSI: New York and went on to create an epic orchestral-electronic score for the second season of the post-apocalyptic series Dominion. In terms of video games, his list of credits include such well-known franchises as Command and Conquer: Generals, Captain America: Super Soldier and Wolfenstein. MovieScore Media had previously released the composer's scores for Dark Prophecy and The Devil's Tomb.