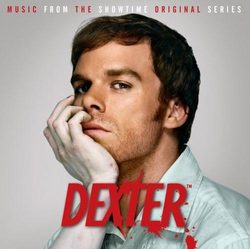 Dexter is a Showtime original television series starring Michael C. Hall as serial killer Dexter Morgan, who works as a forensics analyst specializing in bloodstain pattern analysis for the Miami-Dade Police Department. The soundtrack features the Emmy-nominated theme song by Rolfe Kent, distinct, original score by Daniel Licht and a diverse collection of songs from the first season of this hit television program.

Forget C.S.I.; Dexter might just be the most watched forensics-themed TV show in crime labs around the country. It certainly is the subject of many a conversations where I work: here is a cable show whose protagonist is a serial killer with a code of honor who also happens to be a blood splatter expert working for the Miami Police Department. While it is a serialized adaptation of a book, Darkly Dreaming Dexter, it does seem like a gutsy move to feature yet another TV show based in Miami whose lead is a red-haired forensic specialist. Dexter, however, is everything C.S.I.: Miami is not: clever, funny, and oddly fascinating. Bringing aural life to this twisted drama is a team of three main players: the music supervisor, Rolfe Kent, and Daniel Licht. The music supervisor on the show has assembled an eclectic collection of Afro-Cuban and Latin songs of various tempi to suit the show's Miami locale; Rolfe Kent has come up with an addictive and original main title theme that is astute in its instrumentation and distinctly memorable; and Daniel Licht has composed a refreshing musical backbone for the show that adroitly mixes Dexter Morgan's dry wit and the show's signature element, blood. The album, released weeks before the anticipated second season premiere, gives us a generous serving of all three musical components and is a delight to listen to. It is at once creepy and grin-inducing.

Rolfe Kent's unusual "Main Title" theme opens the album and what a theme it is. It contains bits of reggae, swing, and Latin music, all rolled into one. The reggae beat is maintained throughout the piece by Brazilian and Latin percussion, a guitar, and a bouzouki. The memorable melody is played by a combination of ukulele, piano, and Irish bouzouki, giving Dexter's theme a distinctive Eastern European flavor. A wild assortment of trumpets, pizzicato strings, electric piano, saz, and Indian tambour complete the musical tableau which every week accompanies scenes of violent morning rituals. What is most amazing here is Kent's ability to make all of these disparate elements stick and work together. The Afro-Cuban beats indelibly mesh with the Slavic metallic licks, creating one of the most memorable original main title themes in recent years.

The first half of the album contains a variety of Latin music songs used in the show to establish the Miami locale and to create a distinct sense of irony when combined with scenes of grisly murders overlaid with Dexter's wry narration. Beny More offers an old-time Cuban big band piece with "Conocí La Paz", immediately followed by the electronic dance groove of Kinky's "Uruapan Breaks", the modern Latin song heard on the dance floor as detective Batista tries to move on with his life. A solo acoustic guitar takes us into more emotional territory in the intro to "Flores Para Ti" before an array of staggered beats get the Latin groove going, accompanied by jazzy pop vocals whose cascading lines are echoed by the guitar. Ray Armando's "Con Mi Guaguanco" is a more straightforward piece of Afro-Cuban jazz, while the following "Perfidia" is a humorous brass-heavy mambo instrumental used when Dexter visits a creepy taxidermist's trailer home. Finally, what serial killer show would be complete without a seemingly innocent late-60s, early-70s ditty? Andy Williams' "Born Free", used sparsely in the season one finale, closes the first half of the album. Interlaced with the songs are three short score cues overlaid with Dexter's inner monologue, where the subjects range from his insatiable hunger to kill, the meaning of blood, and his innermost desire to be himself and show the world who he really is.

The second half of the album is devoted to Dan Licht's crafty and distinctive score. Weaving in elements of warm Latin music and cold, brooding electronics, Licht has given the show its memorable voice. The cable shows I'm used to watching (The Wire, Rescue Me, nip/tuck) tend to eschew original scores in favor of a more realistic use of music, The Wire going to the extreme of only using diagetic music (i.e. source music). Dexter relies much more heavily on score and Licht provides what is arguably one of the most unique and peculiar sound on cable: the album offers us a selection of demented waltzes, comedic Elfmanesque passages, and introspective themes. A cue like "I Can't Kill" represents the perfect bridge between the warm and the cold elements. It begins with a solo, nylon-stringed acoustic guitar carefully articulating a mournful melody with a Latin influence; it is then replaced by atmospheric electronic effects before returning over synthetic beats, creating a modern chimera, at once sentimental and detached, perfectly modeling Dexter's dilemma. "Escalation" is a fine example of Licht lightening the mood by utilizing guïros, spiccato strings, and a bouncy bass line. The Latin gothic mood not only refers back to Kent's main title theme but also evokes Danny Elfman's style, halfway between the macabre and the funny. The cue then segues into the most memorable recurring theme of the score, the ascending line of the Blood Theme, heard on the piano and glass harmonica over high-pitched percussive effects and wavering female vocals.

A second theme is heard in "The House": a minor key waltz, not unlike Mike Andrews' "Liquid Spear Waltz" from Donnie Darko. This off-kilter melody for the piano comes back in "Courting the Night" and "Wink". There is also an uplifting family theme with Latin roots heard on the guitar in multiple cues which is given a great, breezy send-off in "Epilogue". Perhaps Licht's creepiest theme is the full Blood Theme, which plays over each episode's end credits sequence. A solo electric violin sings its haunting melody while a piano rumbles and distorted samples grind in the background. It is heard in "Blood Theme" and forms the basis for Jon Licht's song, "Die This Way", an unfortunate sidestep that I shall quietly put away in the "Zoë Poledouris in Starship Troopers" folder.

Dexter is a unique show and it deservingly received unique music to suit its mood and characters. There is a reason Rolfe Kent's theme was nominated at this year's Emmy Awards for "Outstanding Original Main Title Theme Music": it is unique and will stick in your head for a long, long time. The Latin-flavored songs that salt and pepper the show definitely give Dexter a spicy sound, and Daniel Licht's compelling score, deliberately mixing the warm elements of Dexter's much desired humanity and his cold detachment, makes for an original and irresistible listen. This album is a winner in my book: its blend of Cuban beats, metallic bouzoukis, and haunting female vocals will definitely leave you disturbed, darkened, and devoted.

N.B.: The iTunes release of Dexter is appended with five extra score cues by Daniel Licht, all of which belong on the colder, more electronic side of the show's music. "The Ice Truck Killer" is a particularly interesting addition to the soundtrack, making use of a creepy North African or Middle Eastern instrument, halfway between a cello and a man's hum. A "Second Season Suite" closes this short batch of bonus cues, just in time to tease us for the season two premiere.