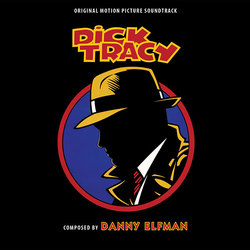 For the 1990 Walt Disney feature Dick Tracy, composer Danny Elfman brought forth his rambunctious, bristling action music style, yet treating Dick Tracy with more romanticism —all while leaving room for numerous musical numbers and montages set to Stephen Sondheim songs (songs sold separately). In contrast to the brooding, looming Gothic theme for the prior year's Batman, Elfman wrote a no-nonsense, bustling march for Dick Tracy, bereft of sentimentality, which Elfman describes as a "crimestopper" melody that bursts forth in halting statements in the film's main title and accompanies Tracy's action throughout the film. The score features a surging, romantic theme for Tracy's love, as well as nods to George Gershwin.

For his original 1990 soundtrack album, Elfman assembled 35 minutes of highlights, offering a carefully edited, musically rewarding experience. The fragmentary nature of the many short cues and the rapid pace at which they play under their respective scenes made the above presentation both practical and exciting. For this new 2-CD release, courtesy Walt Disney and Warner Bros. Records, Intrada presents his original 1990 album intact as the first part of our program. To get a closer look into Danny Elfman's music for Dick Tracy, Intrada was provided access to the complete original scoring session elements, recorded onto Mitsubishi 880 format 32-track digital tape, preserved in the Disney vaults in pristine condition. We commissioned Dennis Sands, the veteran engineer who helmed those original scoring sessions, to completely remix the entire score, allowing us the opportunity to add more than an hour of previously unreleased music, including unedited versions of the 1990 album selections plus a wealth of additional film cues, alternates and revisions, all appearing in crisp, state-of-the- art sound.