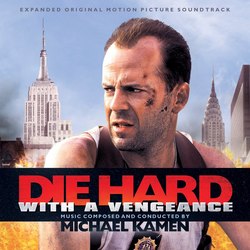 Michael Kamen is back with a vengeance at La-La Land Records with this spectacular 2 CD set brought to you courtesy of Sony Music and 20th Century Fox. Literally years in the making, this explosive set features over 2 hours of music written and recorded for the third film in the Die Hard franchise. The soundtrack that was released back in 1995 only contained only a fair amount of score, songs and some classical cues that were not ever featured in the final film. This newly expanded release gives the fans what they have been clamoring for—and then some. Not only are we releasing the score as written for the film, but also several rejected tracks never heard until now. If you are fan of high octane, action packed scoring this is a must have release!