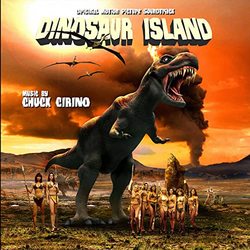 Dragon's Domain Records, to be distributed through buysoundtrax.com, presents the original motion picture soundtrack to Dinosaur Island. This album features the music composed by Chuck Cirino for the fantasy-comedy about a group of soldiers stranded on a remote island occupied by scantily-clad amazons and hungry dinosaurs.

The 1994 film was directed by Jim Wynorski and Fred Olen Ray, financed by Roger Corman, and distributed straight to video by New World Home Video. "The film got made because Roger had some dinosaurs left over from Carnosaur," said Fred Olen Ray. "I think the lure to re-use these things he'd already paid for was too much to resist."

Composer Chuck Cirino rejoined the directors after scoring numerous films for them individually. Restrained to create a score on then state-of-the-art synthesizers by the film's low budget, Cirino merged the musical influences of Bernard Herrmann, Elmer Bernstein, Ennio Morricone, and '60s exotica with his own stylistic savvy to create a compelling and exciting score that, for the most part, played straight man to the film's stimulating slapstick. "This score is a little more special to me than the other scores of that era because Jim and Fred were doing it together. I knew this was going to be an interesting movie because they were making a giant dinosaur movie with limited funding. This was their answer to Jurassic Park, so I wanted the score to be huge!"

Dragon's Domain Records is excited to bring the soundtrack from Dinosaur Island to compact disc for the first time, mastered by James Nelson at Digital Outland with exclusive liner notes by author Randall Larson, with the participation of the composer and the directors.