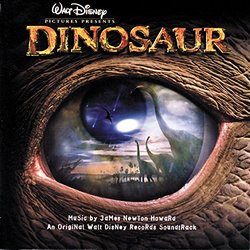 Everyone likes dinosaurs. When watching Jurassic Park we realized that films could take us even further than before in experiencing these extinct creatures for ourselves. With The Lost World, we got a glimpse (at the end) of what the world might have been like for these creatures, 65 million years ago. The Walt Disney Pictures computer-animated film Dinosaur actually takes us there, and while the technical aspects of the film do bring this world to life, it's not as realistic as Jurassic Park or even the more recent "Walking With Dinosaurs" documentary series. In this world, dinosaurs talk, and have overexpressive emotions that their walnut-sized brains really wouldn't have permitted. But this isn't supposed to be reality, and the film focuses on Aladar, a young plant-eater who is raised by monkeys, and his "family" as they join with others on the journey to the fabled nesting grounds.

For this film, James Newton Howard lent his composing talents, fresh off of such films as The Sixth Sense and Snow Falling on Cedars. The resulting score is filled with emotional moments and dramatic action that take full advantage of the orchestra and choir. As enjoyable as it is to listen to, it's not the best score Howard has done - but it still ranks in his upper echelon.

"The Egg Travels" is a great cue that takes the listener on a journey through many of the themes that will be appearing in the score. The primary theme occurs around 1:38, and it quite inspirational. Large and heroic, this was the theme I found myself humming when I left the film. Other cues of note are "The End of Our Island", in which a meteor shower destroys Aladar's island home. In that cue, there are some great ominous moments of wonder just before the meteors strike. Right afterwards, it's a full-on action cue as Aladar and his "family" run for their lives.

Plenty of action (ala Waterworld and The Fugitive) spatters the soundtrack, and Howard excels at mixing intricate percussive rhythms and the orchestra to give a rather unique sound. "Across The Desert" is a rather driving cue mixing those elements along with tribal African chants. The secondary theme is heard clearly in this cue, around the 0:55 mark. Again, Howard's talent comes through on this score.

A rather emotional moment in the film occurs when the "Breakout" cue is used. Since I do not want to give away plot points, let me just say that this is a rather emotional scene in the film and just when all hope is lost, a last ditch effort for survival proves to be successful. The music in this cue works powerfully in the film, and now the cue has so much more meaning than when I first heard it (before I saw the film).

One thing I have to wonder about. Why the use of African rhythms/chants? The film doesn't take place in any particular country, but I think that perhaps with the success of The Lion King and Tarzan, the filmmakers felt that it could continue along the lines of that success with another African-themed film score. Lebo M himself was involved, and his work is really good - but also noticeable and sticks out; there are two or three moments in the film which seemed a bit overly Lion King-ish. (See "The Courtship" for example.)

Another item of note: I heard that there was a Kate Bush song in the film. It doesn't appear on the soundtrack, and it's not in the film anymore. I have no idea what happened to it, but I'll be honest - I'm glad it wasn't used. Heck, if the dinosaurs didn't talk it still would have been just as effective a movie. Overall, Dinosaur will most likely not become an overnight classic. But it's got enough of the right elements - including a rather well done score - to become extremely popular, even if the storyline is rather simplistic and many questions go unanswered. The album runs about 50 minutes long, and is missing some great action cues that were in the film. However, it's still a really good album, and I would suggest picking it up if you get the chance.