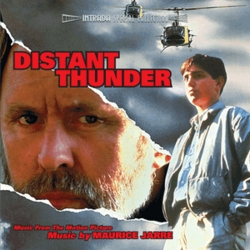 Maurice Jarre's score for the 1988 Paramount film Distant Thunder was deep in his "synth period," scoring a run of Peter Weir films and others with all-synth or mostly electronic ensembles.

Jarre enlisted his usual band of synth players—including Michael Boddicker, Ian Underwood, Ralph Grierson and Nyle Steiner—all among the elite instrumentalists in their field at the time. Jarre always recorded his tight little group as an ensemble, and they would play whole sections together, recording directly into a mixing board. In the score's "Main Title," Distant Thunder opens with eerily descending diminished chords (voiced by a choral effect) over a low sustained drone, with a lone trumpet voice referencing the film's military undercurrent. The motif is punctuated with a tumbling percussive figuration that becomes a recurring ingredient in the score. For this premiere release Intrada presents the score in stereo from the original session tapes stored at Paramount.