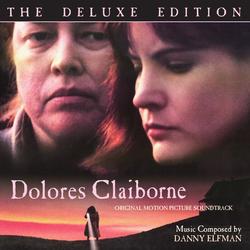 One of the most important and impressive film scores of Danny Elfman's career, Dolores Claiborne is an often overlooked and grossly under-appreciated score from the maestro. Not only does it depart from Elfman's characteristic style both aurally and compositionally, but it also displays Elfman's maturity as a filmmaker and storyteller using music to define, paint, and coax a psychological narrative.

Adapted from the Stephen King novel of the same name and directed by Taylor Hackford, Dolores Claiborne is a psychological dramatic film in which most of the entire movie unfolds inside the characters' minds. Most of what is said or done on screen is a giant red herring. What you see is not always what you get. As the narrative unfolds, various pieces of the puzzle are revealed one by one and Elfman's score is right there to cajole each perfect piece into place.

This 2 CD Deluxe Edition greatly expands the soundtrack from 9 to 31 tracks!