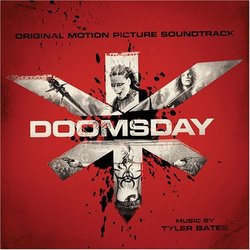 To give Tyler Bates credit, the score for the film is far better than the film itself. If I were going to review the film, it was a floundering mess. One part Resident Evil, two parts every other bad zombie/viral outbreak movie ever produced with a dash of Timeline and Underworld.

As for the music, the replay merit is about par for the genre. The one exceptional track I found out all twenty-three was \"Exodus\". I feel it has the most emotional scope of album. Mournful to triumphant, the track represents a wide range of emotions. \"Exodus\" is defiantly repeat worthy, and Bates\' use of vocals against sad tremoloed strings heightens the atmospheric mood presented in the track.

I liked his use of trumpet in displaying its ability to play sorrowfully verses just fan fares and flourishes. As well as his use of heavy drums, processed, which seems to be the order of the day with many cinema composers of late, to give a rhythmic impact to the beginning of the piece. Over all \"Exodus\" is rather characteristic of Bates\' scoring from what I\'ve heard of his previous scores, which is all and well, but the one thing I did like more from this cue is that it was longer, normally the most you will get from a Bates cue is 3 minutes leading to many more cues than you would find on other scores. With \"Exodus\" it\'s just shy of five minutes long, and in being so, it allowed, I thought at least, for Bates to really give us what we wanted, orchestral variety.

The second track I found that I enjoyed out of album was \"Bentley Escape\". At the start of the track it\'s rather horror/action film sounding with high registered violins accenting the piece. Then around a minute into the track a guitar is brought in and the focus of the track is changed, no longer is it a track that sounds like it was cued for filler, but now that it has purpose. The guitar alters the musical landscape into something that\'s replay worthy, makes it something you want to listen to again and again because it just sounds so good.

Again it\'s Bates\' addition of vocals within the track that gives it a little something extra. But I also have to mention the strings moving eighth note lines, you can tell as distinct as a Bates\' score is, from his use of certain tools in film scoring he cames from the Zimmer school. This is the say not an entirely negative thing, as anyone that enjoys film scores has at least one Zimmer score they enjoy.

On a closing note, no pun intended, I would like to make mention of the albums inclusion of Frankie Goes to Hollywood\'s track, \"Two Tribes (Carnage Mix). This is the longest track on the entire album and I think it fits perfectly with the idea of the film. A wide array of musical ideas are explored in the song and Frankie Goes to Hollywood did a wonderful track.

Over all I don\'t feel that this album is worth a purchase, every track isn\'t worth a second listen, but the ones that are, are worth purchase on iTunes. I look forward to Bates\' future work, I can say without a doubt Bates has a way with percussion and driving rhythms that get the foot tapping, and that alone is one thing I await from his in his next score, to see what new and interesting rhythmic patterns he utilizes.