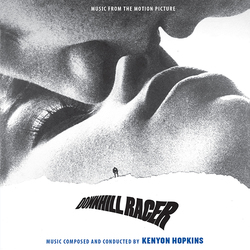 Intrada announces the premiere release of Kenyon Hopkins' score for the 1969 Paramount Pictures film Downhill Racer. For Hopkins, this moody character portrait was mostly subservient to the beautiful locales and thrilling skiing sequences, featuring breathtaking imagery from the skiers' point of view. This posed an interesting dilemma in that the beautiful locales were mainly blankets of colorless white. Hopkins found himself writing, re-writing and, in some cases, re-writing yet again entire cues in his attempt to bring the emotional weight of music to numerous sequences. And for all that effort, many of his cues were entirely dropped from the finished film. He comprised his orchestra of 51-players, fusing his unique style of jazz and orchestral drama that showcases his hallmark sound.

Kenyon Hopkins had a highly successful career in scoring dramatic films—typically heavy on dialog and character development. Strangely he remains largely underrepresented on CD even though he had many vinyl releases in the day. While Downhill Racer was never released on vinyl, it is a striking example of his talent and brings further attention to this talent.

This Intrada premiere presentation was prepared from both the ˝" original 3-channel stereo session masters and Ľ" mono mixdowns of several cues intended for source music sequences. The masters were in pristine condition with the stereo elements yielding particularly crisp and dynamic results. Per the needs of the picture, the score is not lengthy, but when the sparse portion that does appear in the picture is coupled with all the unused music, there is nearly an hour of Kenyon Hopkins at his finest.

Downhill Racer chronicles the rise of a young but talented Colorado skier Dave Chappellet (Robert Redford) with Olympic aspirations who becomes a member of the U.S. team when another member is sidelined by injuries during the buildup to the celebrated games. Chappellet is a man of relatively few words, emotionally aloof, displaying an arrogance that keeps him at a considerable distance from his fellow team members. His talent is apparent and acknowledged by coach Clair (Gene Hackman), but not well received by anyone due to Dave's egotistical persona. Even a brief interlude with a young woman (Camilla Sparv), generates little warmth, and the romance ends with her leaving in complete silence. In short, David Chappellet remains one of the coldest character portraits in Redford's luminous career.