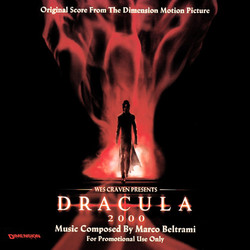 You knew it had to happen.  First came Wes Craven Presents Wishmaster, then Wes Craven Presents Carnival of Souls.  So was anyone really surprised when we got Wes Craven Presents Dracula 2000?  Director Patrick Lussier helmed this modern-day yarn about the re-emergence of Dracula, his quest for his new bride, and even provided us with a rather cool twist on the genesis of the vampire legend.  Scoring this film was veteran Scream composer Marco Beltrami.  Unfairly typecast as being a horror score composer, Beltrami has flexed his creative juices on many non-horror projects, and even garnered an Emmy nomination for his score to "David and Lisa".  But even though he has done other things (and done them better), he is rather adept at providing an effective horror score.  Dracula 2000 is no exception, and Beltrami lets lose with a score that will shiver your spine.

Starting with an organ and orchestra accompanied by a female soloist in "Lifeboat", the choir and percussion add to the tension as the main title sequence progresses as it recaps the ill-fated voyage of the Demeter from the original "Dracula" tale - you can tell that this isn't a score to cuddle up to.  Soft dissonant atmosphere and a solo violin provide creepiness in "Mary's Theme", and the soloist comes back in to add a sense of despair to the whole thing.  More quiet tension in "Canned Heat" is followed by a bunch of interstitial cues that range from tense action with synth overlay ("Vampire Hunters / Drac Loves Lucy / Break-In") to softer (yet still tense) drama ("Brotherly Love").  His use of the same orchestration from Scream in a few places evokes memories of his score to The Watcher, which had the same problem at times.  Granted, it's probably just what the filmmakers asked for, but more variety would have been nice.

A seven-minute long cue ("Hot Cross Buns / L2K / Vamp On A G String / Trimmin' The Bush"), seems to plod through a bunch of various actions, and never really left me fully satisfied, until the end, where it really picked up.  Two of the better cues ("Movable Feats / Come To Daddy", "The Sun Also Rises") consist of full-on orchestra and choir, with a bit of synth overlay.  The use of the organ is notable, and Mamak Khadem's solo vocalizing is (as before) worth checking out - it's quite exotic, and the ending is large and somewhat optimistic.  There's a final track called "Gang Fang", and I have no idea what the point of it is.  It's just a bizarre track with synth percussion and orchestra, and should have been somewhere else on the album - to end the CD this way feels weird.

With a running time of just under 30-minutes, this is a rather enjoyable horror score by Beltrami, but I think his more emotional dramatic scores showcase his real talents.  If you want a great example of his horror work, check out Mimic, or the Scream/Scream2 album.  But for fans out there, you'll probably want to spring for the album, which can be found at http://www.supercollector.com/  I'm still waiting for a "David and Lisa" / "Tuesdays With Morrie" release, which would help dispel the impression that Beltrami is stuck in the world of horror.