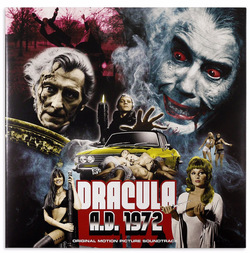 Performed by
The Hammer Studio Orchestra

Death Waltz Recording Company is proud to exhume another classic from the Hammer horror stable in the shape of Dracula A.D. 1972. Bringing the legend of Bram Stoker's immortal creation into then-present day, the film pits the charismatic Count up against the disco decade after being resurrected by a group of hippies performing black magic, with Cristopher Lee and Peter Cushing reprising their signature roles. Composing this madness was Mike Vickers, former member of 60's pop quiet Manfred Mann, who provided a suitably contemporary score that followed in the footsteps of jazz scores from that era.

Dracula A.D. 1972 starts off very traditionally, with the classic symphonic Hammer sound as established by the likes of James Bernard scoring a nineteenth century prologue as Dracula and Van Helsing battle to the death. Dramatic drum rolls and emphatic brass mark this as the Hammer you're used to, before the main theme strides into action with its Barry-esque brass hits and uber-catchy sax melody and shocks you with just how cool it is. Vickers combines both approaches with ease, although a highlight is the psychedelic and harrowing score for the black magic ceremony. A classic example of great scoring from the world of pop, Dracula A.D. 1972 will leave you breathless and screaming—with delight.