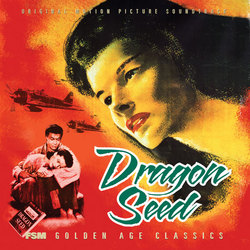 The studio similarly drew on top-drawer talent by assigning its finest musical dramatist, Herbert Stothart, to score the film. Stothart had already scored The Good Earth, and for Dragon Seed he created another strong, effective score rife with Asian color and lavish themes—including authentic folk tunes and national anthems. Stothart made extensive use of pentatonic scales and what were then considered "orientalisms," but stamped the music with his own blend of lyricism and dramatic pulse that is sometimes tender, sometimes explosive, and always apt.

Due to the existence of dual microphone perspectives, FSM has been able to mix nearly all of Dragon Seed in genuine stereo. The sound quality utterly belies its age (over 65 years old). This 2CD set contains not only Stothart's complete score, but numerous bonus tracks, including the trailer music and an alternate English-language version of the main title. The edition, limited to 1,000 copies, includes notes by Frank K. DeWald and Alexander Kaplan, numerous film stills and publicity materials in a 20-page booklet designed by FSM's Joe Sikoryak.